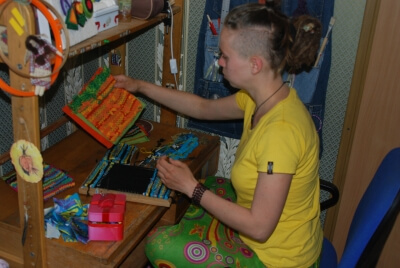 My name is Alexandra Nosko) I live in a happy marriage and and are raising two boys)) My husband and I are very fond of traveling. When the oldest son was 3 months old, my husband and I went to India. This trip brought out a lot of positive emotions and ideas. My husband perfected his pottery, and I was fascinated by hand weaving strips of cloth) I weave accessories, jewelry, and pillows. I love patchwork and create ethno earrings made of felt.

We engage in yoga and just enjoy life in this perfect world))) By buying my work, people get a piece of happiness and love that I put into each creation. Each work is unique, because everything is done only by hand.

Up to 19-20 century weaving was one of the most common home occupations in the traditional cultures of the peoples of Russia and neighboring territories. Used mainly in the production of flax and hemp (m. N. Fimble) canvas for underwear garments, cloth for clothing, as well as belts and finishing tape. With the process of weaving, particularly with those responsible and the beginning stages of cutting the finished product (for example, strips of canvas), is related to many beliefs and superstitions.

Developed and patterned fabrics, in example, the production of goods decorated with geometric patterns by weaving colored threads. Patterned fabric in the form of strips of various sizes and tapes used for decoration of garments from the 18th-19th centuries. Mainly, they were sewn to a canvas or white shirts and head towels. The Tatar and Bashkir cultural Bran weaving was used mainly for the purpose of interior items, Chuvash (grassroots ethnic group) - almost entirely to decorate garments.

The former was a more common technique of laying textile (cross with a bright or staggered patterns and characteristically narrow "gaps"), was the so called Chuvash and Udmurt. Bran and electoral processes, in which the pattern is formed by overthrowing colored weft threads (red - in battle textile, colored - in the election). Fabrics have been used for manufacturing of belts - striped, with the ornaments and even inscriptions; As a rule, it was a flat or a ribbon belt. Among the peoples of the Volga and Ural regions (Mari Moksha, Erzya, Udmurt) domestic weaving remained: to make clothes - until 1970-80s, and for textile holiday belts - up to the 21 century. Traditional Folk Weaving is supported today by numerous enthusiasts and professional artists, including folk arts and crafts enterprises.